The office will remain CLOSED until further notice. Please contact one of our agents for additional assistance.

Bonnie B. Davis’ Legacy and the Center Named After Her

Find this article at:
go.ncsu.edu/readext?831817
— Written By Ivelisse Colón (2 weeks ago) North Carolina Cooperative Extension is a 100 plus-year-old agency that provides information to the community based on research from the two state land-grant universities; N.C. A&T State University and NC State University. There have been many extraordinary Extension Agents that served their communities in unique ways and one of them was recently honored with a building named after her, the Bonnie B. Davis Environment and Agricultural Center.

In 1950, when Bonnie Brierly Davis began in Extension she became the first Black Home Demonstration Agent in Orange County, a position now known as Family and Consumer Sciences Agent. By that time Extension was still segregated but that didn’t detour Mrs. Davis from serving everybody in the county. There were no indoor bathrooms, proper offices, or a demonstration kitchen for black agents and their club members to use. Despite these hardships and as the parallel Extension organizations merged, Mrs. Davis worked to further racial integration in the N.C. Cooperative Extension of Orange County office and improve working conditions for other local black agents. During her career, she partnered with local organizations such as the Friends of Department of Social Services, Orange Congregations in Mission, and the Orange County Library Board of Trustees among many others, and received many county, state, and national awards including the Orange County’s Pauli Murray Human Relations Award in 2000. 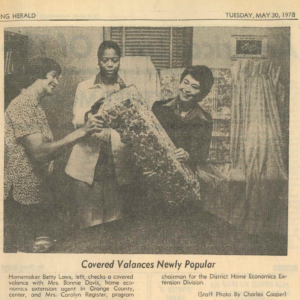 In 1990, Bonnie B. Davis retired from Extension but continued her community outreach for years. In 2013, she was inducted into the North Carolina Cooperative Extension Family and Consumer Sciences Hall of Fame in recognition to her exemplary service to North Carolina and Orange County through Extension’s FCS program.

After Mrs. Davis death in 2018, Ivelisse Colón, FCS Agent for N.C. Cooperative Extension in Orange County began gathering information about her through friends, former colleagues, and fellow ECA club members. She submitted a proposal to name the new Environment and Agricultural Center after Mrs. Davis, and in February 2021 the Orange County Board of Commissioners unanimously approved the naming. In August 2021, there was a ribbon cutting ceremony presided by Mrs. Renée Price, Chairwoman of the Orange County Board of Commissioners, and Mrs. Bonnie Hammersley, Orange County Manager. The event happened outdoors and some attendees took a short tour through the new building.

The new Bonnie B. Davis Environment and Agricultural Center is the first county building named after a Black woman, and the only agricultural center in the state of North Carolina named after a Black Family and Consumer Sciences or Home Demonstration Agent. The building has a state-of-the-art climate control system that will help conserving energy. It will house the county’s N.C. Cooperative Extension, the Department of Environment, Agriculture, Parks & Recreation (DEAPR), Farm Services Agency (FSA), Soil and Water Conservation District, and the Forestry Service.

In addition to this building, Extension will memorialize Mrs. Davis’ legacy by establishing the Tarleton & Bonnie Davis Memorial 4-H Youth Garden at their home property in the near future.

Want to Know More About Bonnie B. Davis?

Check these links for a video from the ribbon cutting ceremony and articles about Bonnie B. Davis: